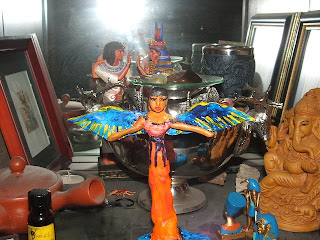 Yesterday, I had my first attempt at making a statue. I tried to re-create the statue of Isis - the original one that we got in Washington got broken. We found it in two cracked pieces under the couch; it is difficult to say how long it has been there, probably months. Joe glued it together, but the wings are still chipped, so it looked like our Isis had clipped wings. I do not think that, if I were the spirit of the Goddess, I would want to visit this image.
Buying a new one seemed too cheap... As if we do not value our faith to put ourselves into it, but rather satisfy ourselves with mere possessions of our Gods' idols. So, I thought that the only appropriate thing to do would be to make a new image.
I do not know the first thing about the art of sculpture. Thankfully, I have a friend, and she is an artist at making dolls. She is quite talented. So, I made a date with her to visit her at the house and dedicate my day to the project of Isis.
Originally, I wanted to make an exact copy of the broken one - small Isis sitting on the stand, with wings outstretched... After about one hour of trying to arrange her face, I was forced to admit that working in such small measurements is above me at the moment. So, I went to a bigger size. That face, even though not as difficult to form, still took me about three and a half hours to make. It seemed that, no matter what I did, my Isis's face always ended up looking like the mask of some angry Ancient God - which I did not mind, but I wanted to remember that she is, in fact, a woman. I could only hope that, after looking at her image, Isis would not get more angry at me than before: " All right, first you break my image and forget it under the couch for several months, now you make a new image of me - is that what you really think of me?!!!"
Thankfully, my friend Tami helped me. She showed me how to smooth the face, how to make the nose and the bone cheeks look more feminine. Finally, she took over for a little while and made some additions that contributed to my Isis looking like a woman.
After we baked the face, I made the body and the wings. I decided to portray her standing, instead of sitting up. The hands were put on a wire. Tami helped by sculpting her hair. Then, we put it in the oven to bake - the "final bake," as Tami put it.
After bringing my Isis home, I looked at her carefully. She was fully ready - to be painted. I made her out of white clay, and I made a round stand for her, so she would be easier to balance (Tami's suggestion).
I chose the acrylic paint colors for her: orange for the dress, tan for the body (I mixed ochre with orange to get it), black for the hair, and blue and yellow for the wings. Originally, I wanted to make the wings black and gold - like they had it in the original statue - but then it occurred to me that her hair was already black, and black and orange together do not make a very pleasant combination. So, black was replaced with blue, and gold with yellow.
As I had more experience with painting than with sculpting - I took some art classes in my childhood - I felt more comfortable with this part. I saw my Isis changing from clay white to the tall, brightly dressed woman with raven black hair and dark blue wings - like the night sky with the stars. I liked the way she looked. Yet, I was very concerned about painting her eyes: one false move - and the black line would go across her face, and what if it gets ruined?
After several misses and repaints (I would wait for the paint to dry and then paint over my mistake with the tan color of the face) I finally found the right brush and the right consistency of paint. I tried to line on the newspaper and on my hand first. It looked perfect. Then, I went to the eyes.
I was holding the brush with my left hand - for some reason, sometimes I can do better with my left hand when it comes to more delicate work. I outlined the eyes with the black. Then, I took some blue paint and put two drops of it - one in each eye - for the color of the eyes.
After twelve hours of work, my Isis was complete. With her wings outstretched, she was walking on the waters of the Nile. What is she doing? Is she looking for her husband's body? Or is she trying to warn her son of his impending death, advising him against touching snakes?
Even now, her eyes look sad and her face looks stern and angry. I cannot blame her. I know how she feels. The main thing is - she is not indifferent.
My youngest daughter kept looking at Isis throughout the whole painting process. She kept saying to me: " Mommy, this is very good. This is not perfect, of course... But it's beautiful."
I am satisfied with that. I hope Isis will be, too.
Posted by Katya at 12:31 PM
Email ThisBlogThis!Share to TwitterShare to FacebookShare to Pinterest
Labels: art, beliefs, expression, faith